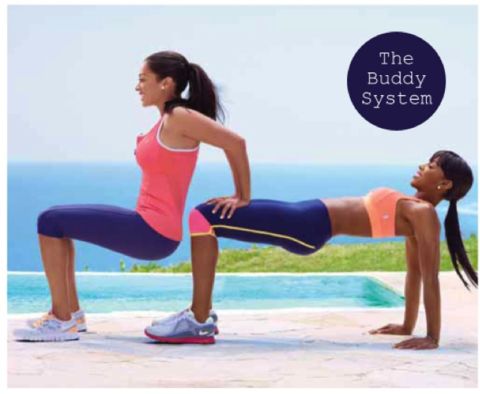 If you have trouble sticking to your plan or simply get too bored exercising alone, the buddy system can be a huge help when you workout. The buddy system pairs two people to workout with each other for exercises purposes. They share their goals for weight loss, exercise and even may share some of their favorite lower calorie food choices. These people support one another in the attainment of goals. It adds another dimension to working out that can keep you on the straight and narrow, especially in the first few weeks of a program where dropping out is has the most potential.

Going to the gym with a friend or spouse lowers the dropout rate.

We love when people join with a friend. It means they have more potential of continuing and meeting their goals successfully. One study by Jack Raglin a kinesiology professor at Indiana University showed that married couples that went to different gyms or worked out at different times, dropped out at a rate of 50 percent, while ones that went to the gym together only had a 10 percent dropout rate. They didn’t even have to workout in the same area, just going together made a difference. It didn’t even have to be a married couple, just someone that you like who might be waiting for you to pick them up or show up at the gym. The more people involved, the better the results.

You’ll break the boredom of exercise when you workout with a buddy.

While working out with a buddy doesn’t mean you’ll be constantly talking. In fact, most people find they normally talk more between sets and after them than during. If you do talk, it burns a few extra calories but whether it’s before, after or during, it also makes that workout more enjoyable and helps you avoid focusing on the difficulty of the task so you get more accomplished. Don’t forget, the harder you workout, the more difficult it will become to talk, so if your buddy’s fitness level isn’t up to yours or far better, consider a code of silence until there’s improvement.

You’ll have additional help in form.

Your personal trainer will watch closely to insure you have the proper form, but sometimes people forget and it’s not discovered immediately. When you work with a buddy between the times of personal training, both you and the buddy can often spot a discrepancy between both of your forms. That’s the time you go to a trainer to make sure you’re both doing it right.

A buddy system keeps you working hard and sometimes adds a bit of competition in the workout, particularly if you’re well matched partners.

You’ll have fun and make your workout a social outlet besides just a physical endeavor when you workout with someone else.

Working out is one thing, but eating is another where a buddy system helps. Joining a friend for lunch can highlight some special opportunities to eat healthier. A buddy system can also help to expand your repertoire of healthy recipes.

When you workout with a buddy, you tend to stick closer to your program of healthier eating, while also sticking with the workout. You’re more accountable.

Hi. I’m Kelly Scott, the owner of ForeverStrong. And … END_OF_DOCUMENT_TOKEN_TO_BE_REPLACED